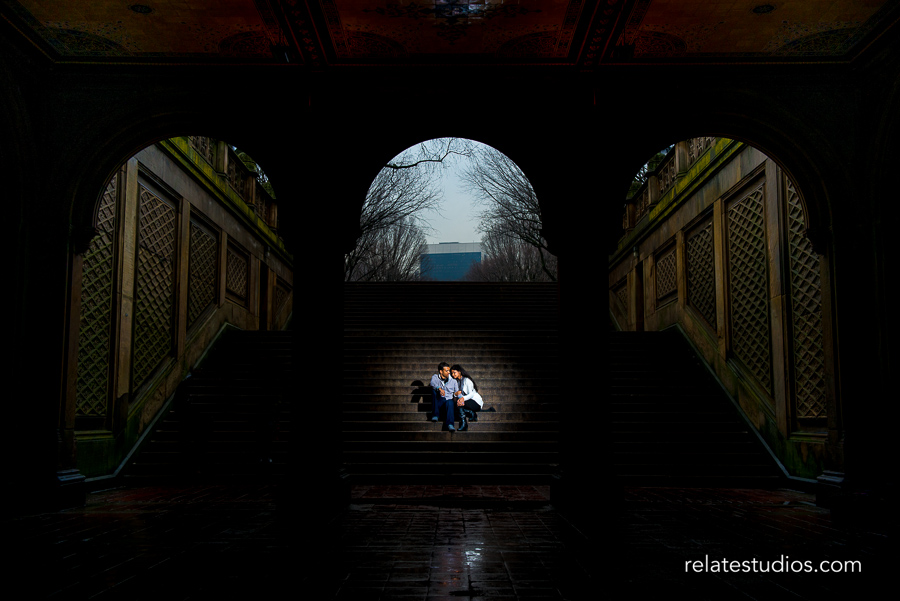 SORRY FOR BEING SO LATE WITH THIS ONE 🙂

I’m dedicating this post to Abby & Neil who hosted us and took care of us for the New York leg of our trip. We shot their wedding in 2008 and they have been our friends ever since. Guys we know that we can’t quantify your generosity but we just want to publicly say thank you.
Juma

Earlier this year we were asked to come The US do some maternity photography for one our past couples. We made our plan to take the trip public and soon we were fully booked for our entire time there. One of the couples who booked us were Nicholas and his wife Sangeeta.

I worked together with Nicholas back in Trinidad and he had been around my photography since my early days of development so we were very happy that he and his wife were our very first shoot in New York. I had been to Central Park on a shoot once before and its generally a great place for photography. The days leading up to the shoot had intermittent showers and the morning it poured in Manhattan. Fortunately for us, when we got to Central Park, the clouds rolled back, that skies turned blue and best of all the temperature rose just enough for us to get rid of our heavy jackets.

On our last shoot in Central Park we made images in the tunnel of the Bethesda Terrace but I felt that there was so much we didn’t explore so I was looking forward to going back. Once in the tunnel, we decided that we wanted to shoot Nick & Sangeeta on the staircase heading back up to the upper terrace. The three arcs and background of the stairs provided an excellent frame and background for the shot we wanted to make.

We wanted to do the shot with them sitting, so I tested the stairs (trouser test) to see how damp they were from the rain earlier in the day. As a matter of principle, we never ask any couple to go where we haven’t gone. During my test, I did discover that the stairs were still pretty damp so I had to use one of the light stand cases and the detachable hood of my jacket as “seat covers”. 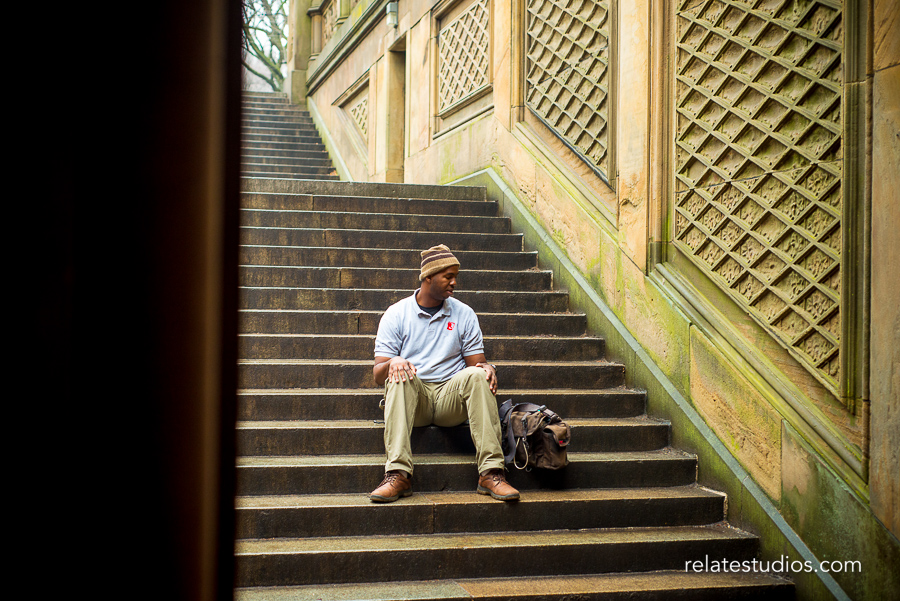 In keeping with our style, we wanted to create a high contrast shot that literally spotlighted Nick & Sangeeta against the environment. Based on the available light we knew that we could underexpose the image to just get the staircase dark enough to add the light back in and create the effect. we would also have the added bonus of the light coming in from the upper level of the terrace that would light the walls.

We had Nick & Sangeeta sit in the centre the first flight of stairs, right in between the centre arc. 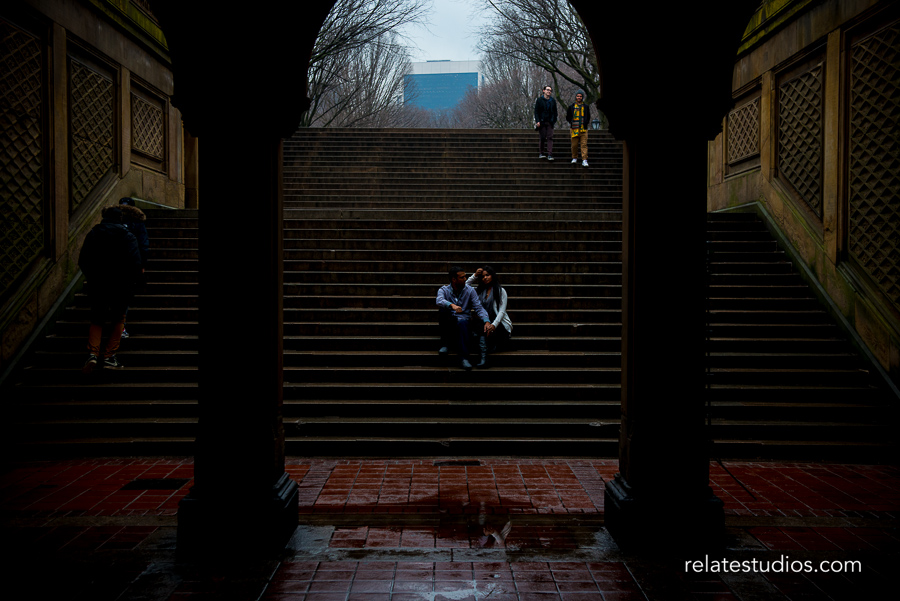 Ayinde set up the flash directly behind the support column to hide our light source. We often do this, because unless its deliberate, the shot is much cleaner when you can’t readily determine the emission point of the light. In this case it we could have left the flash in the open because the foreground of the shot was going to be dark enough to hide it, but it best to practice how to discreetly position light sources out of the line of sight every opportunity you get. 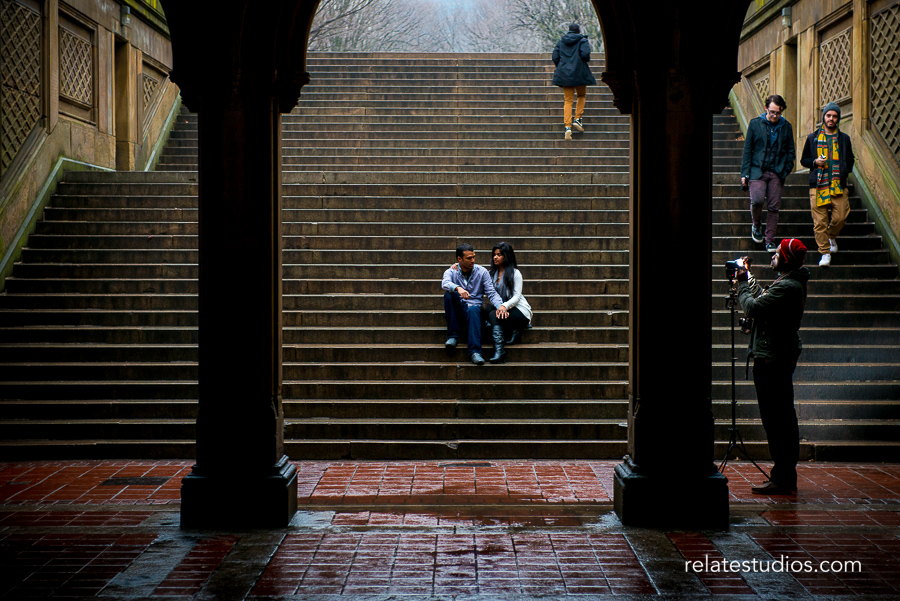 Ok, first test shot and the light is spreading way too wide, which immediately reduces the impact of the spotlight effect. We decided to use a grid to constrain the beam of light into tighter cone and this reduce the area of illumination to create the effect we want. 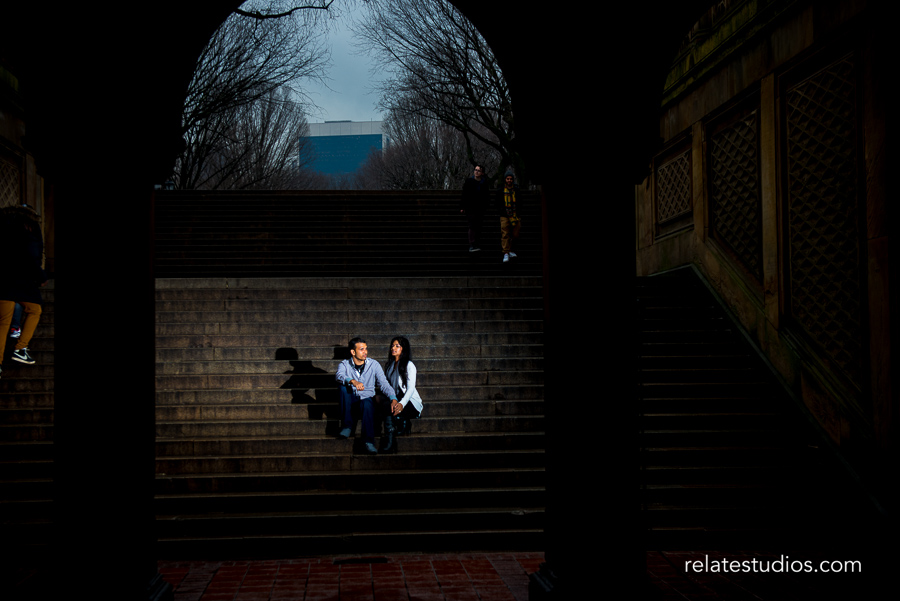 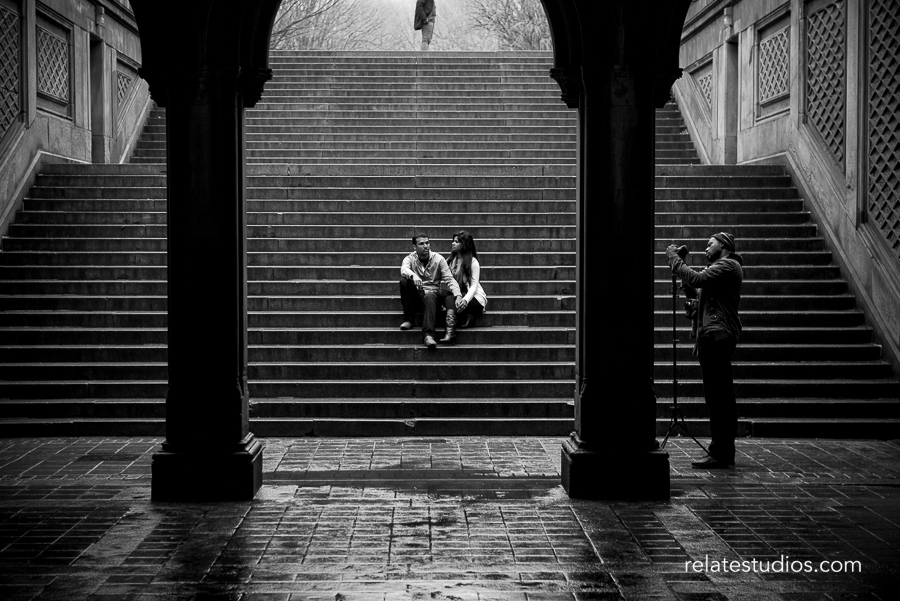 Beautiful! The light is constrained to much neater, tighter circle. Now that the area of illumination is smaller, we have to position the flash exactly right to place the spot light in the directly onto Nic & Sangeeta. This usually requires some trial & error, because it requires aiming a beam of light that is not yet visible and you can see from this shot that we off the mark by a few feet. 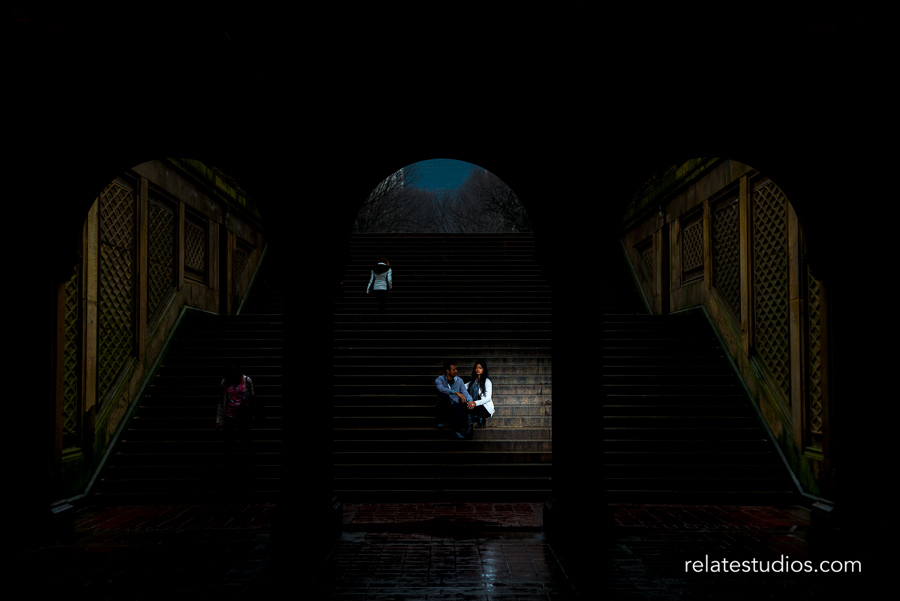 We moved the light, tried again and checked the result of the repositioning of the light. 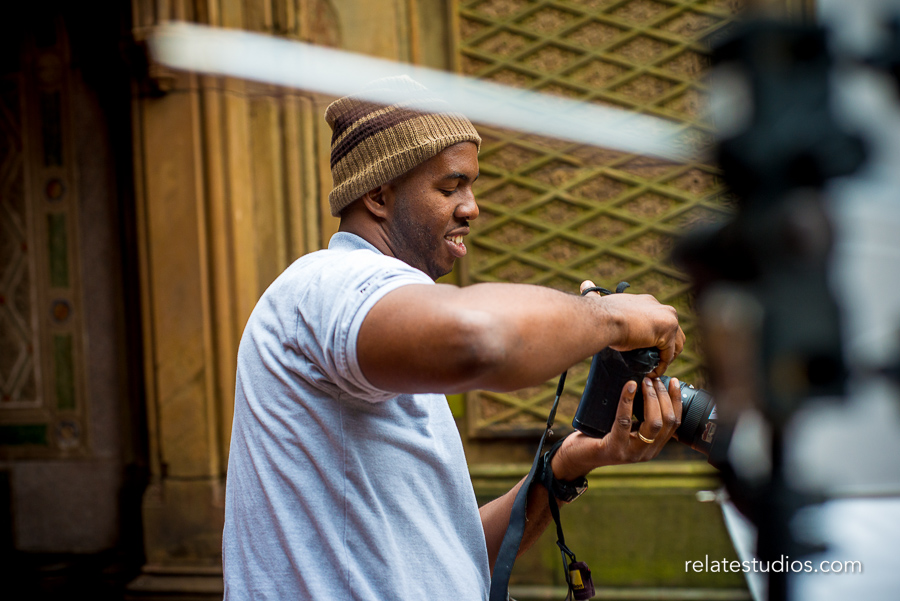 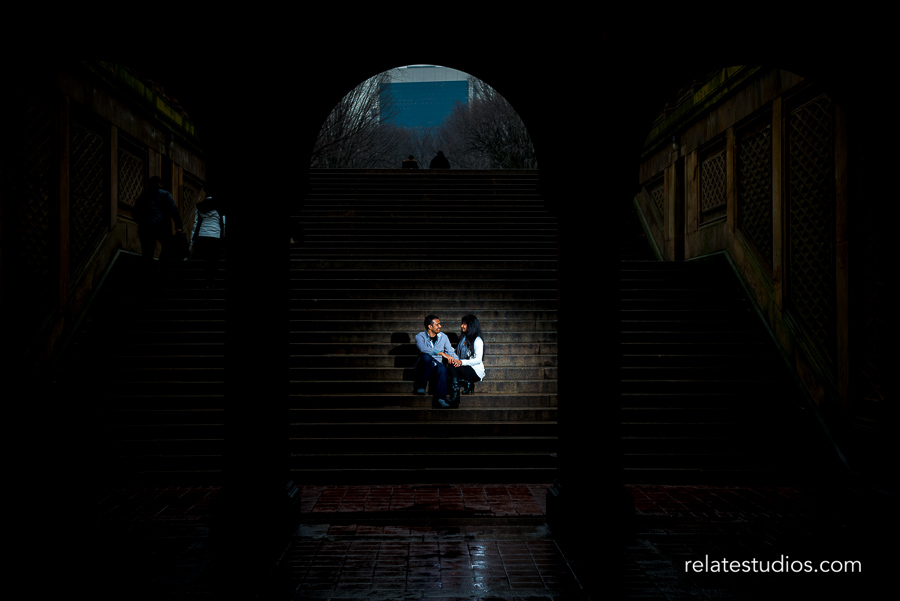 Too much to the right… 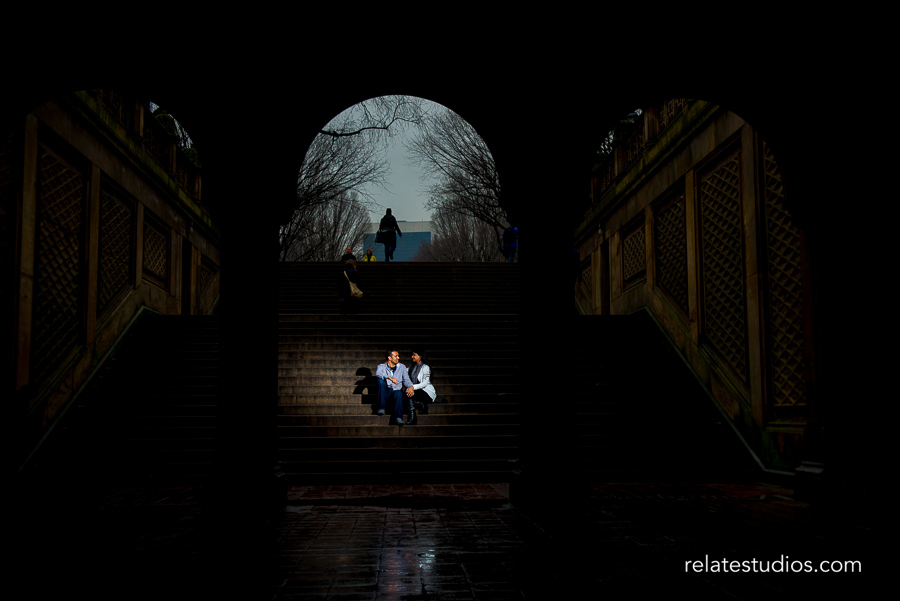 Too much to the left… 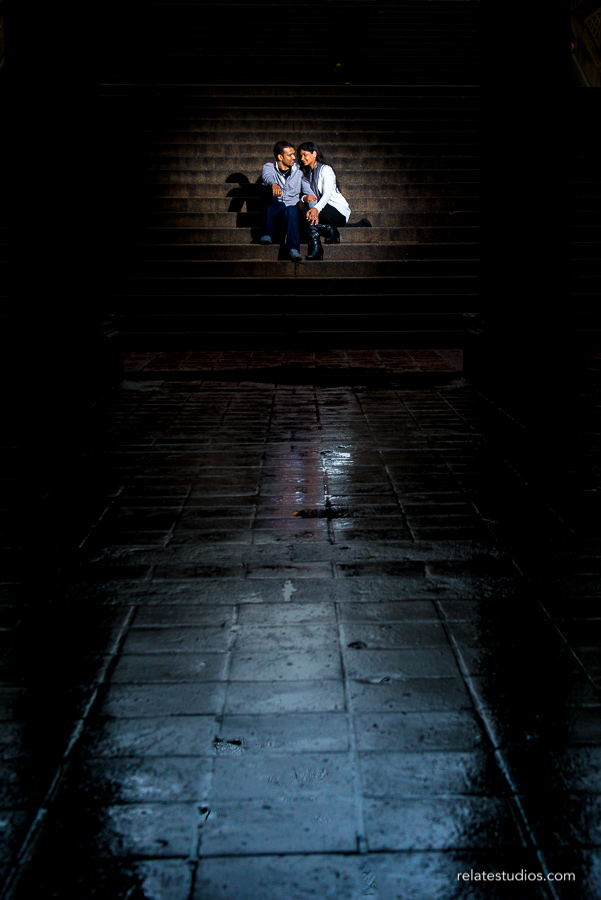 Ahhhh, there we go, spot on!

This is the feel we were going for, light in the midst of the darkness that lifts them out of the frame. Ultimately, we go for the wider contextual shot, which we like to do. 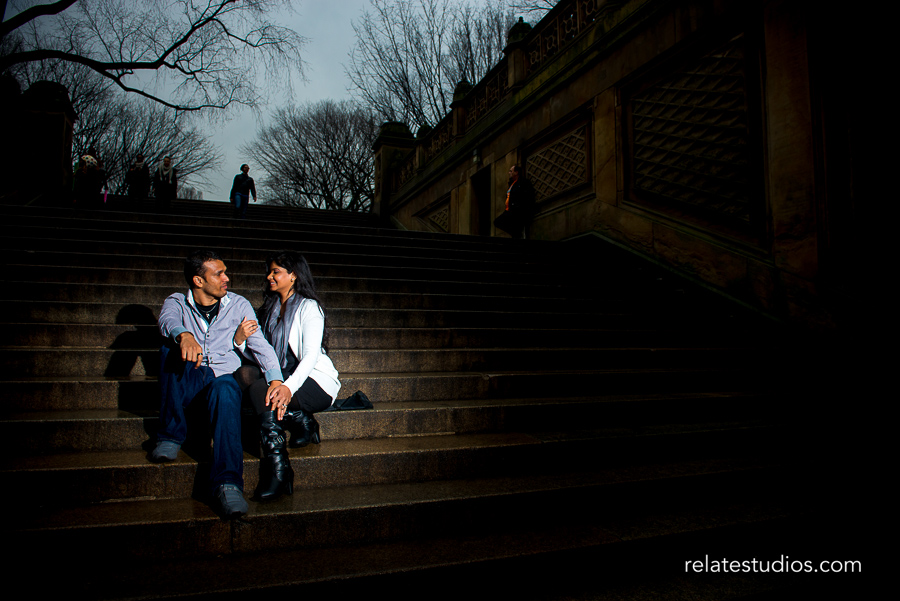 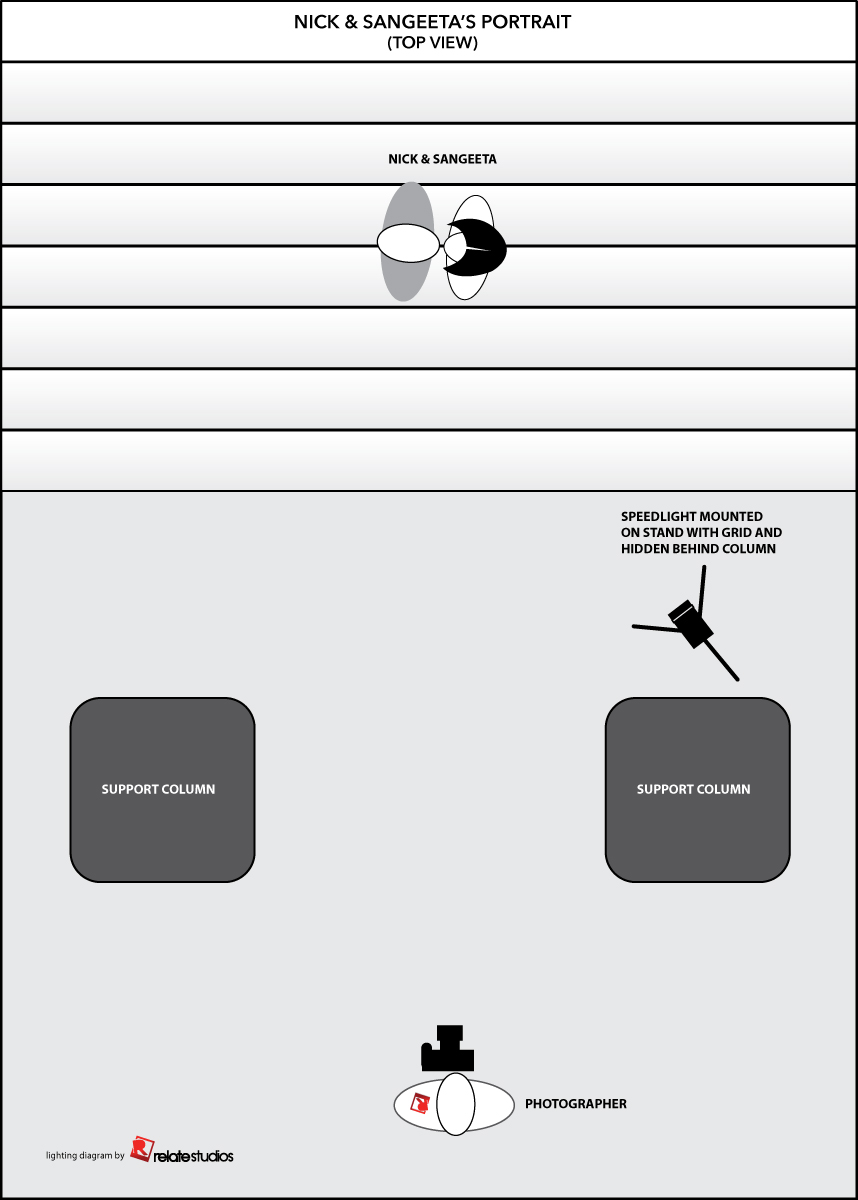 Finally, some random shots of us walking around Central Park trying to find locations… 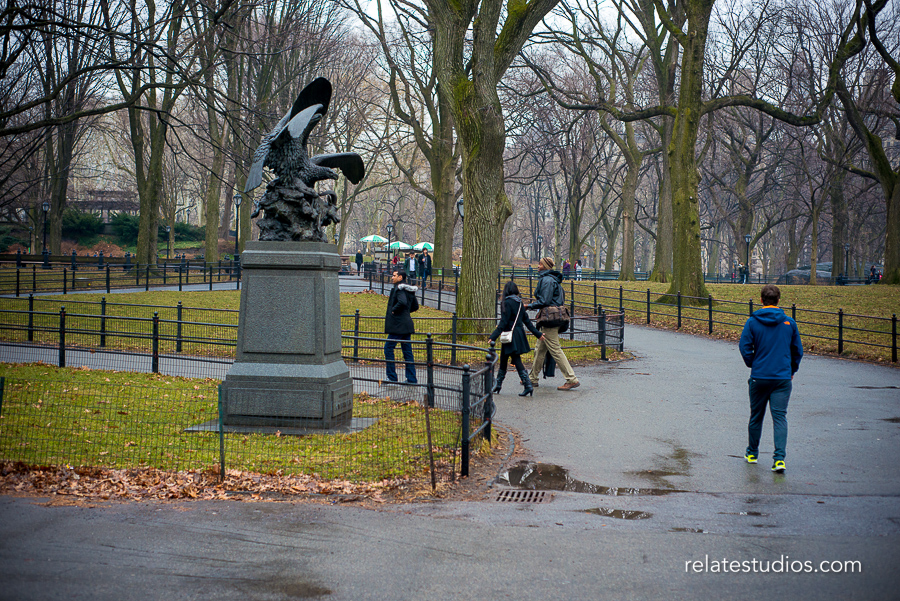 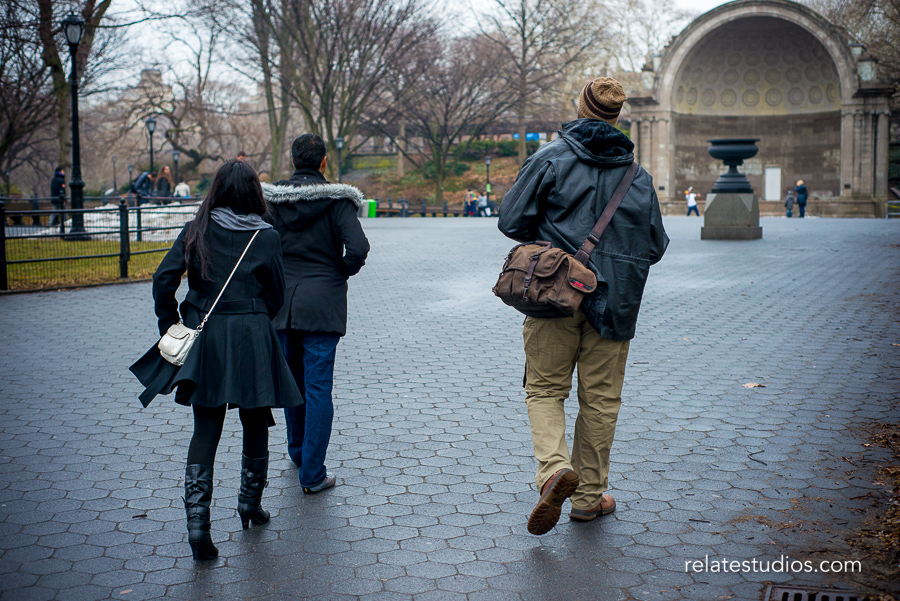 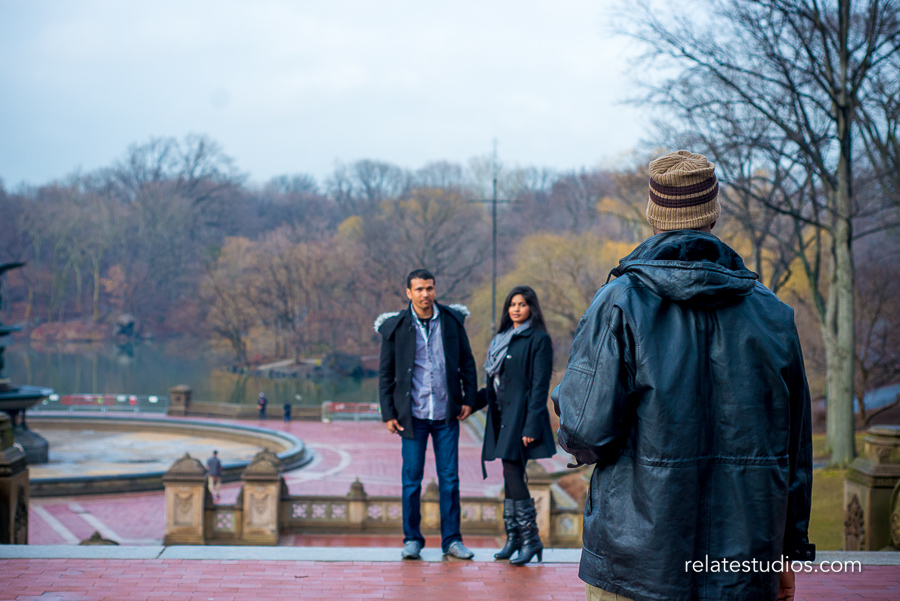 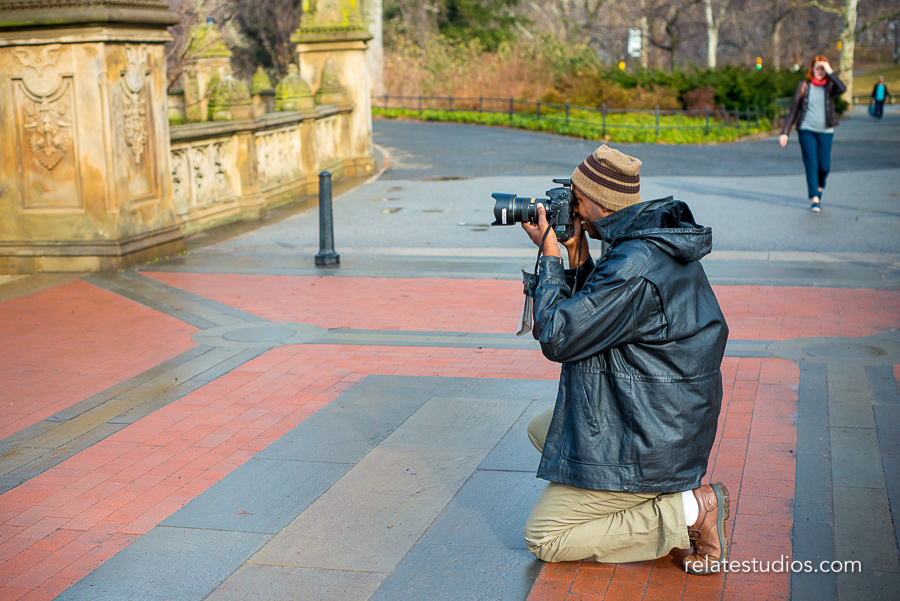 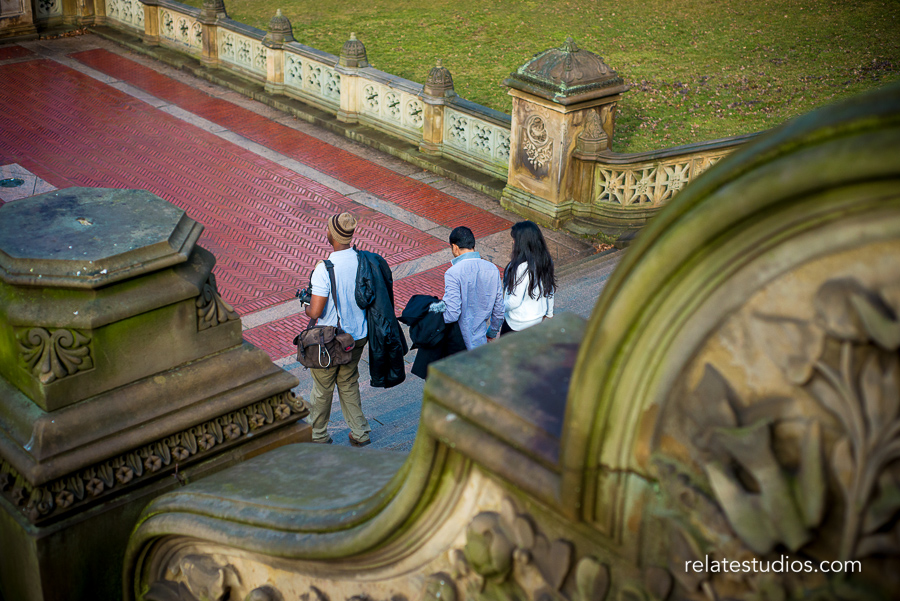 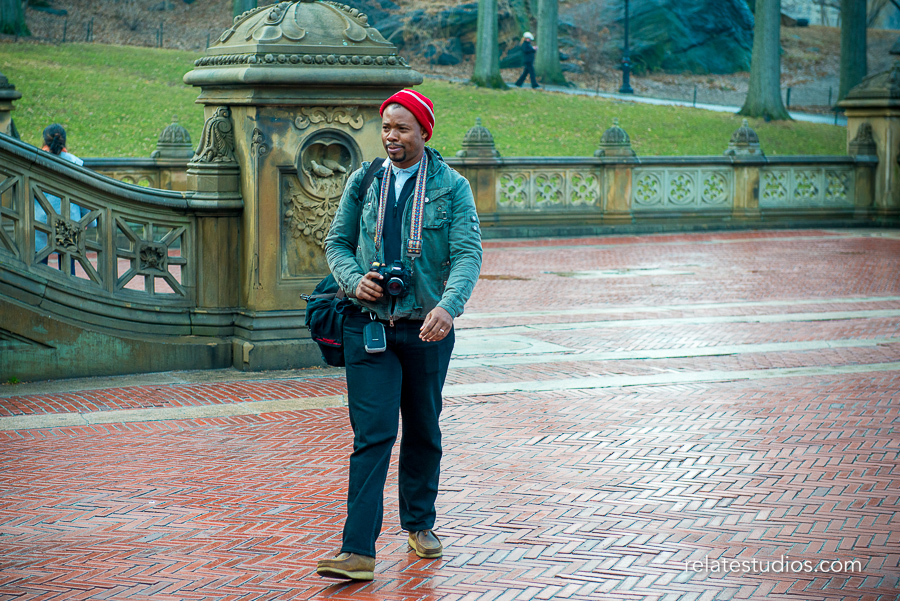 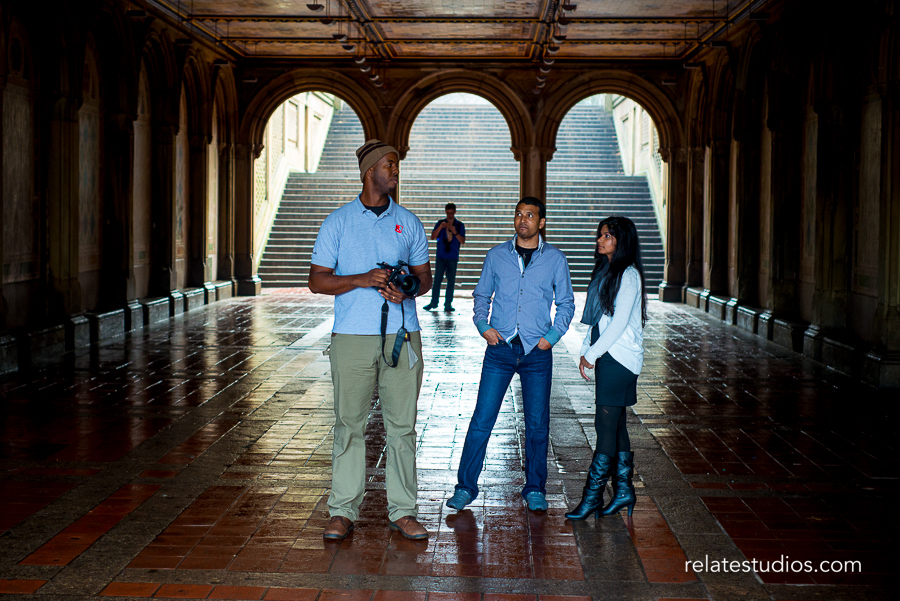 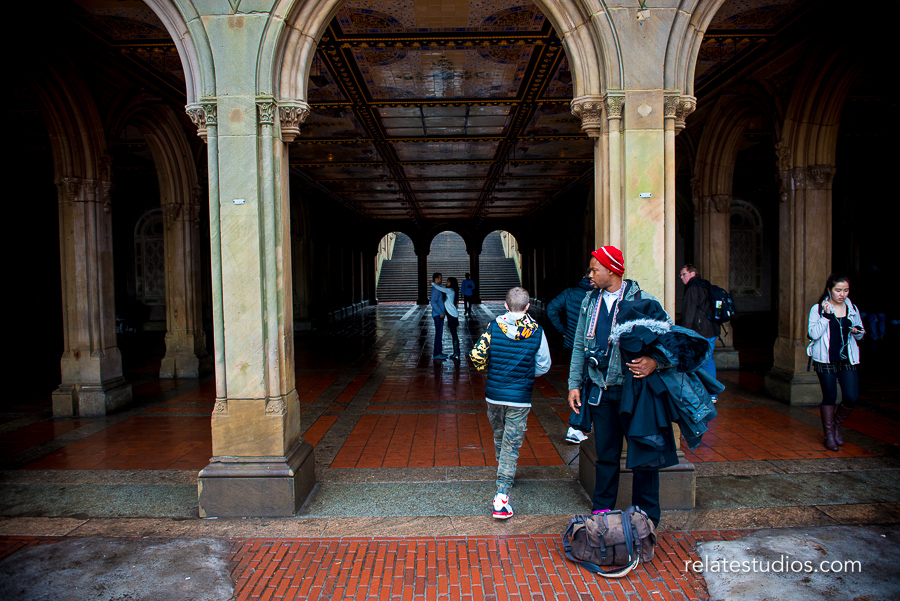 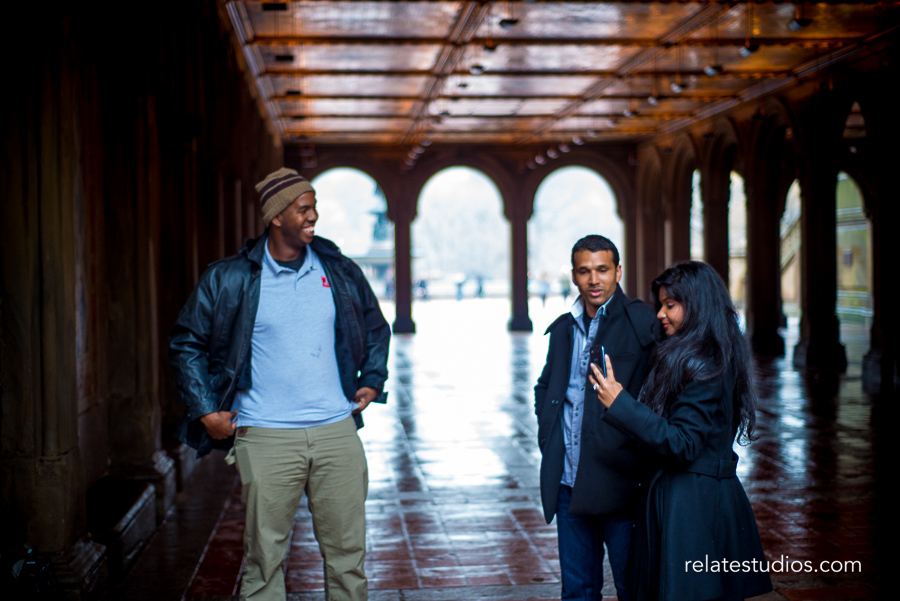 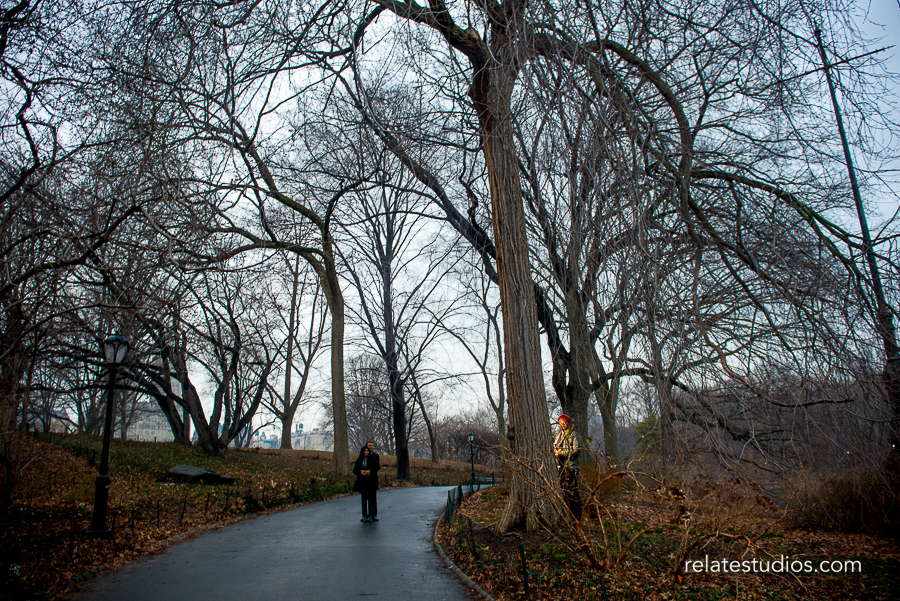 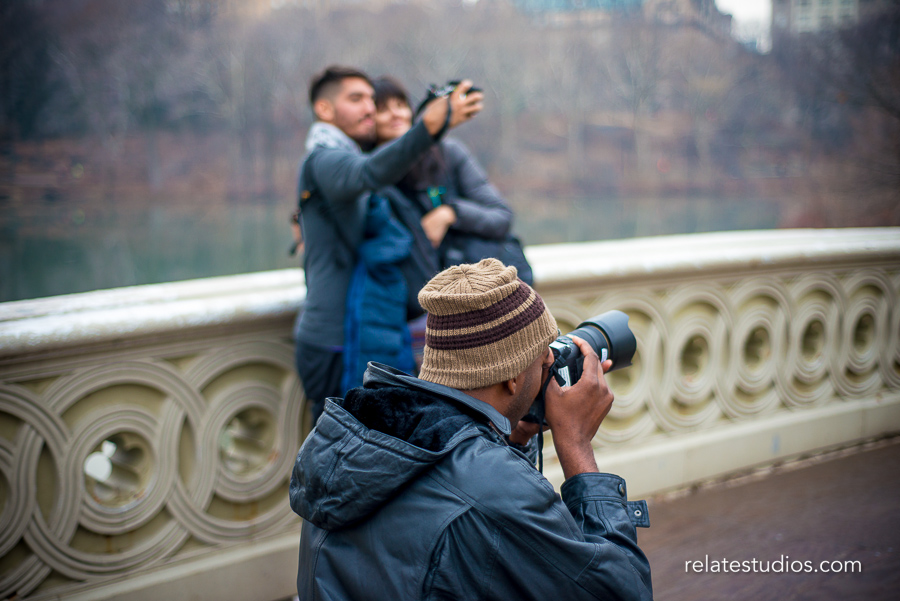 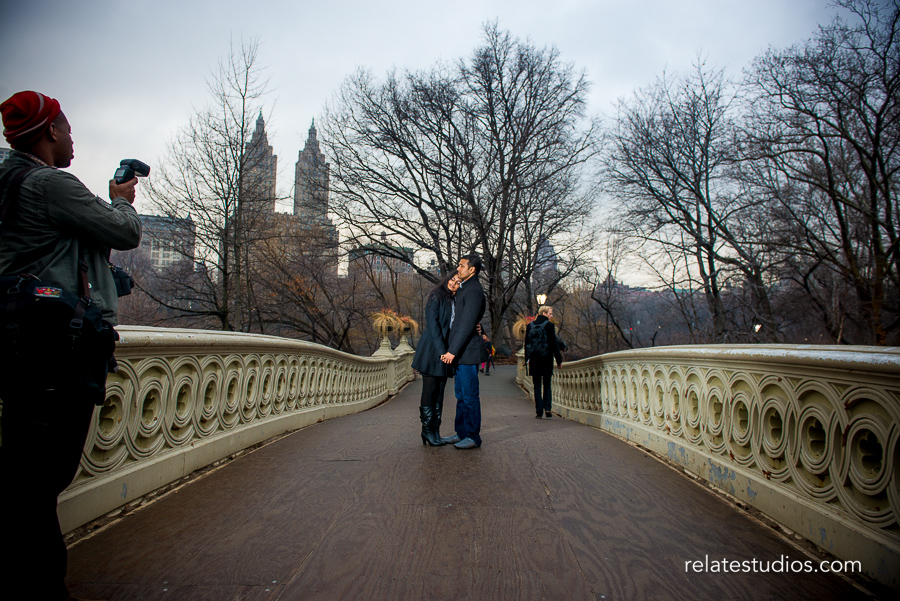 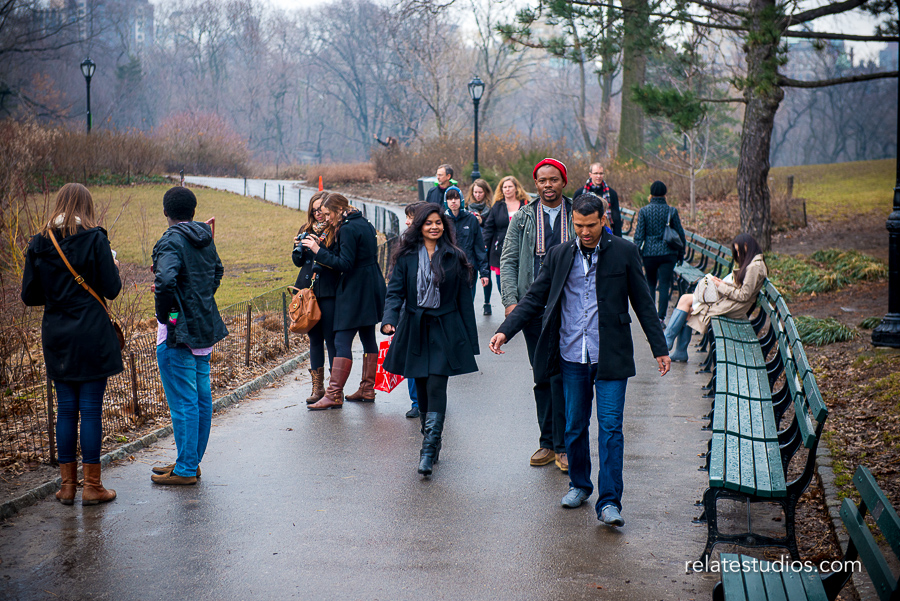 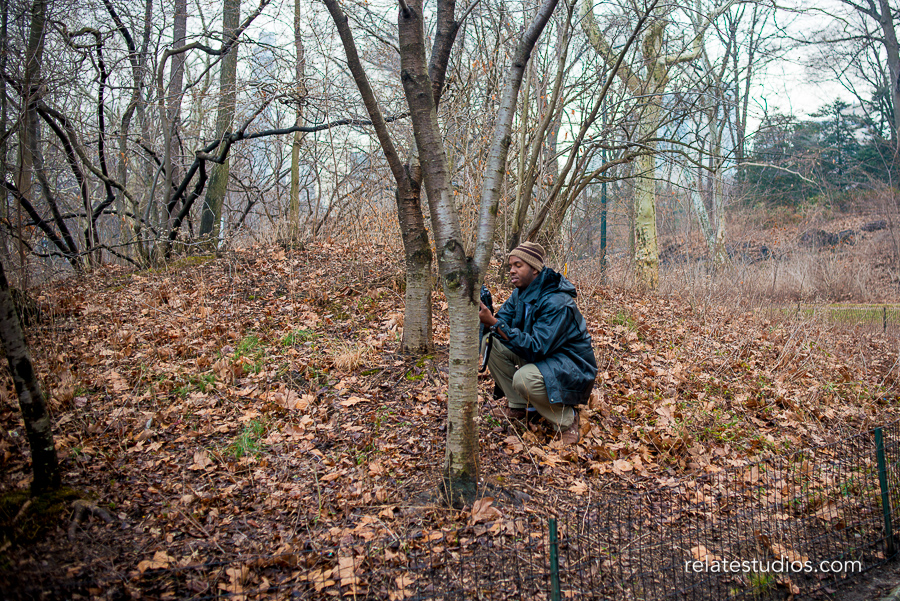 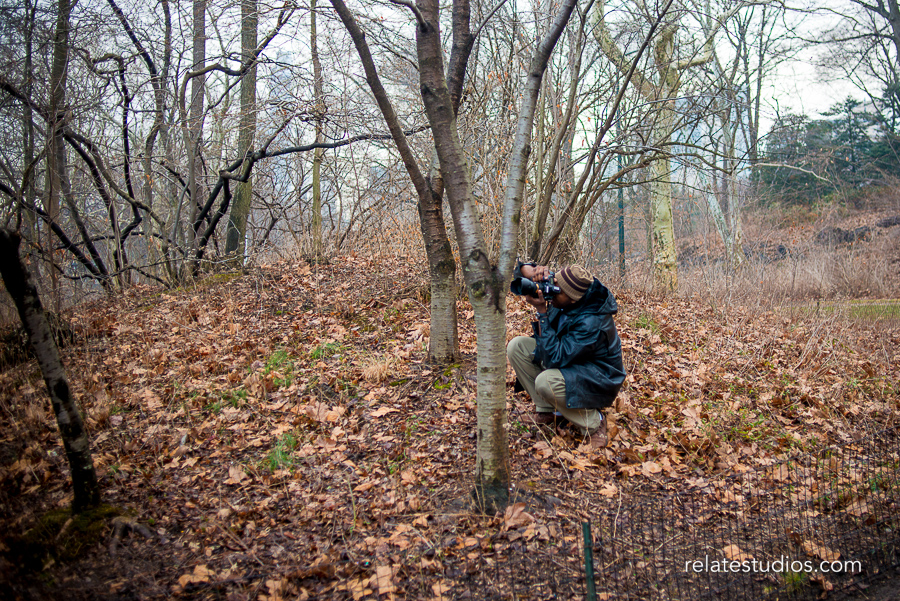 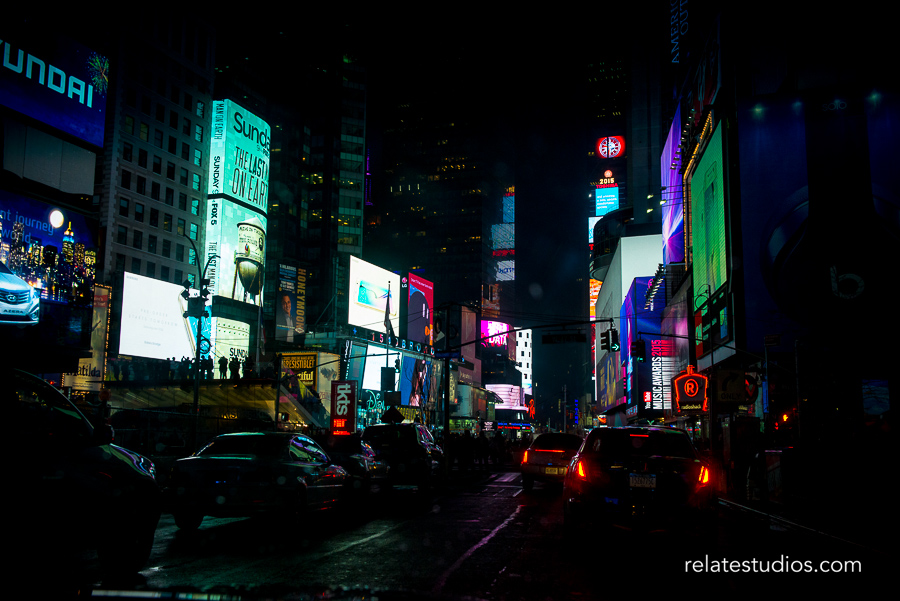